Today the Department of Transport have re-announced £42 million of cycling investment previously announced in January, and lay claim to a further £54 million of local council contribution. Be honest with funding and stop re announcing investment.

Today the Government have been making announcements about funding for cycling.

The Prime Minister announces the biggest ever single injection of cash for the country alongside plans to make roads safer for those on two wheels.

£77 million will be divided between Manchester, Leeds, Birmingham, Newcastle, Bristol, Cambridge, Oxford and Norwich, while the New Forest, Peak District, South Downs and Dartmoor will each share a slice of £17 million funding for national parks. With local contributions, the total new funding for cycling is £148 million between now and 2015.

How about the £148m? This includes all previously announced DfT money, all new DfT money and all local contributions from local authorities (£54m)

Today’s announcement should really focus on the £52m which is new funding.

The Government have done this before, in January 2013

The real amount of new money made available was £42m, the remaining £20m for The Community Linking Places Fund Tranche 2 and the Dangerous Junctions outside London Fund had already been announced on 28th November 2012.

If you’d like to track these announcements going forwards then keep a tab on my page here: https://www.mattturner.blog/investment-in-cycling/

Tomorrow we’ll see the winning bids for the Cycle City Ambition Grants and Cycling in National Parks grants announced. From the press stories it’s not clear that £42m of this was already announced back in January 2013. 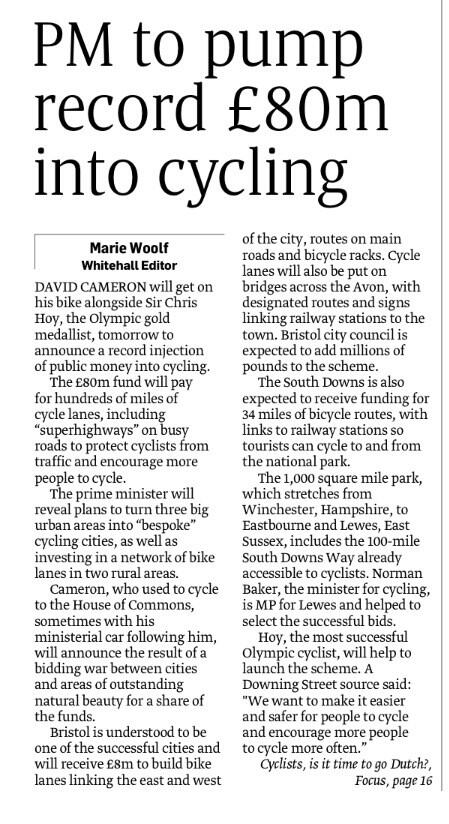 The story in The Times describes the Cycle City Ambition and National Parks Cycling grants which were announced in the last “record investment in cycling” in January 2013.

The Times reports that we’ll see investment of £80m, however these two funds only represent £42m of government funding. What is the remaining £38m?

Kaya Burgess points to one of the latter options with a cryptic tweet pointing out that The Times on Sunday story isn’t the full picture.

Sunday Times piece on cycle funding today has only tiny snippets of the full story. Much more detail to come in @TheTimes tomorrow.

Whatever happens, I’ll update my page where I track all central government cycle funding announcements.

Sheffield was one of the few cities to not submit a bid for the Cycle City Ambition Grant which I have criticised in the past. This firmly shows that Sheffield has no ambition when it comes to creating better conditions for cycling.

If there are new funds announced tomorrow then Sheffield has made it very clear that it won’t be bidding. They have stated that we have no schemes on the cards and that we’ll have to wait a couple of years before any new schemes ready for bidding.

A few weeks ago I wrote a post about the dangers posed to cycling from tram tracks. I quoted from a Sheffield Council investigation into the safety of cycling around tram tracks. The report mentions the need for good quality road surfaces around tram lines.

In most documents regarding on-street cycle lanes it is specifically recommended that maintenance of the surface should be of primary importance, as cyclists are particularly sensitive to the quality of a road surface. Whilst in practice this is rarely implemented due to financial constraints, throughout the tram route the road has been remade and the surface re-laid and so is generally in good condition and can be expected to remain so for a number of years to come.

The rails have recently been being replaced in on street sections, this is what the on road tram tracks look like today on West Street in Sheffield City Centre. 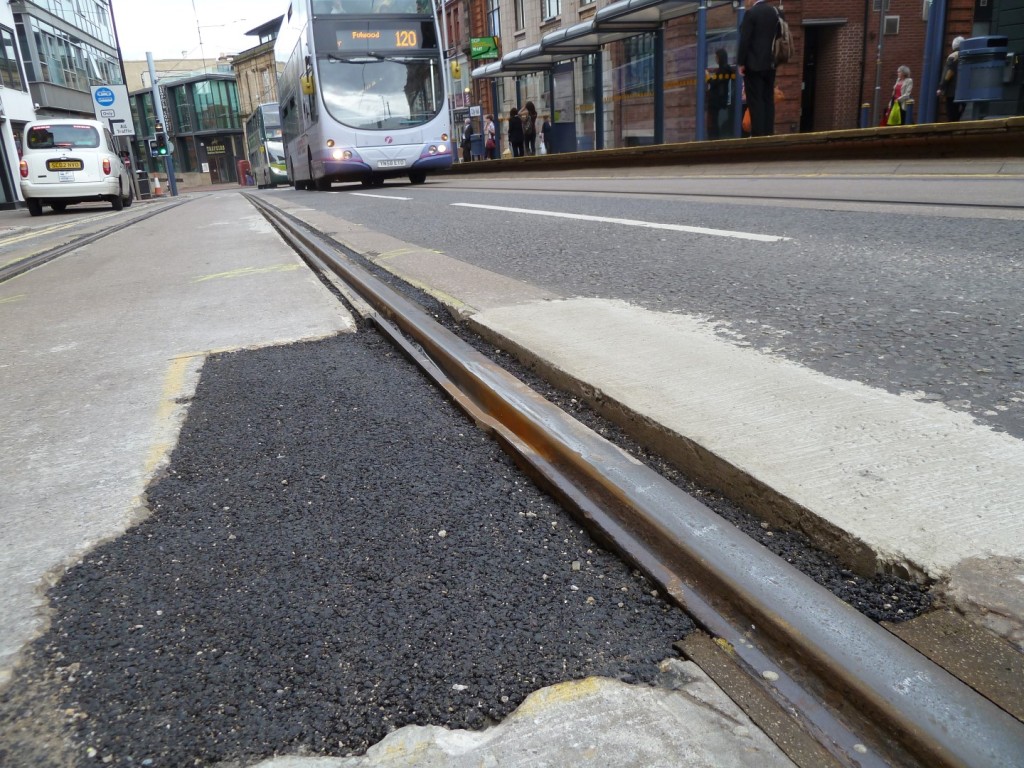 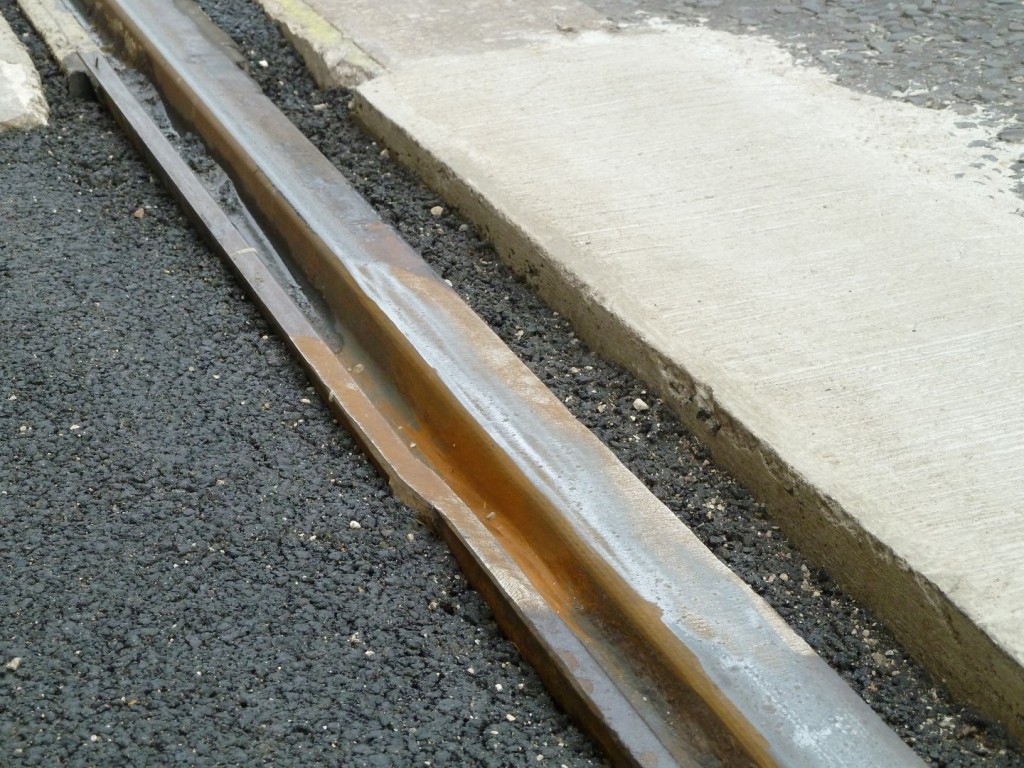 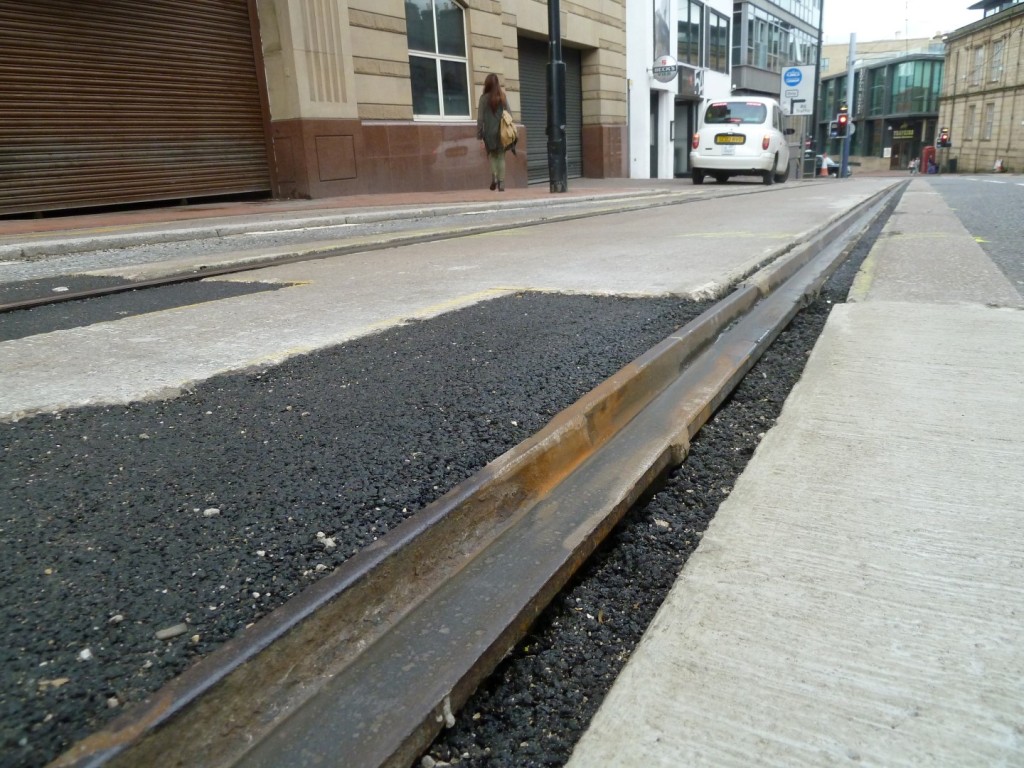 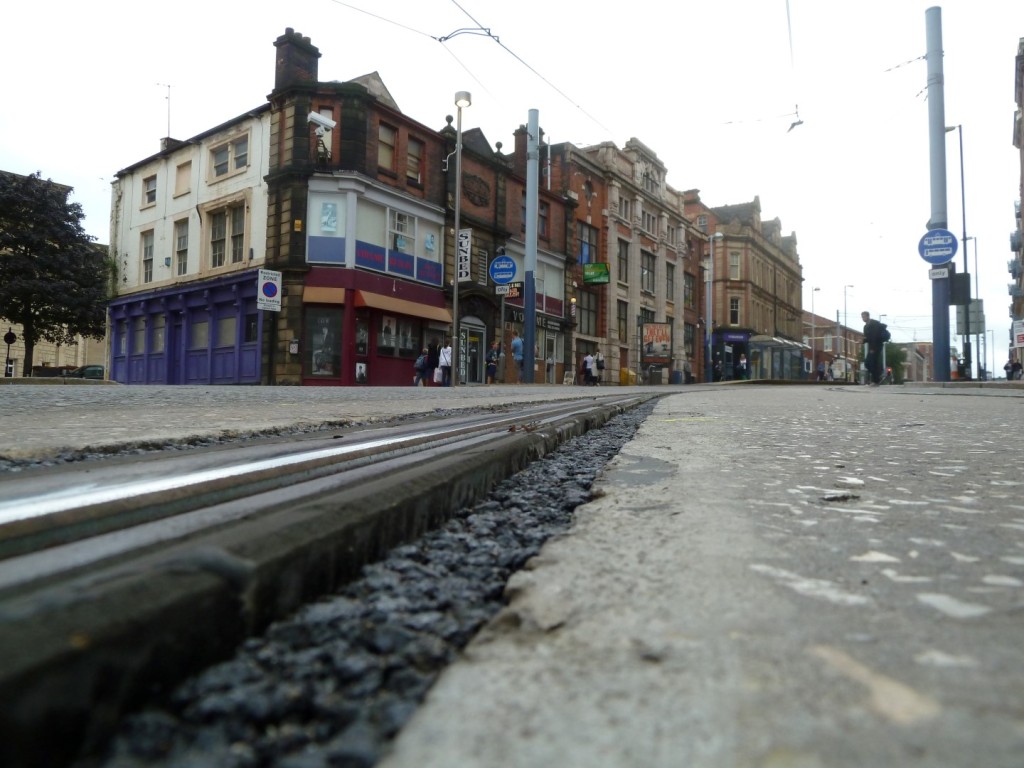 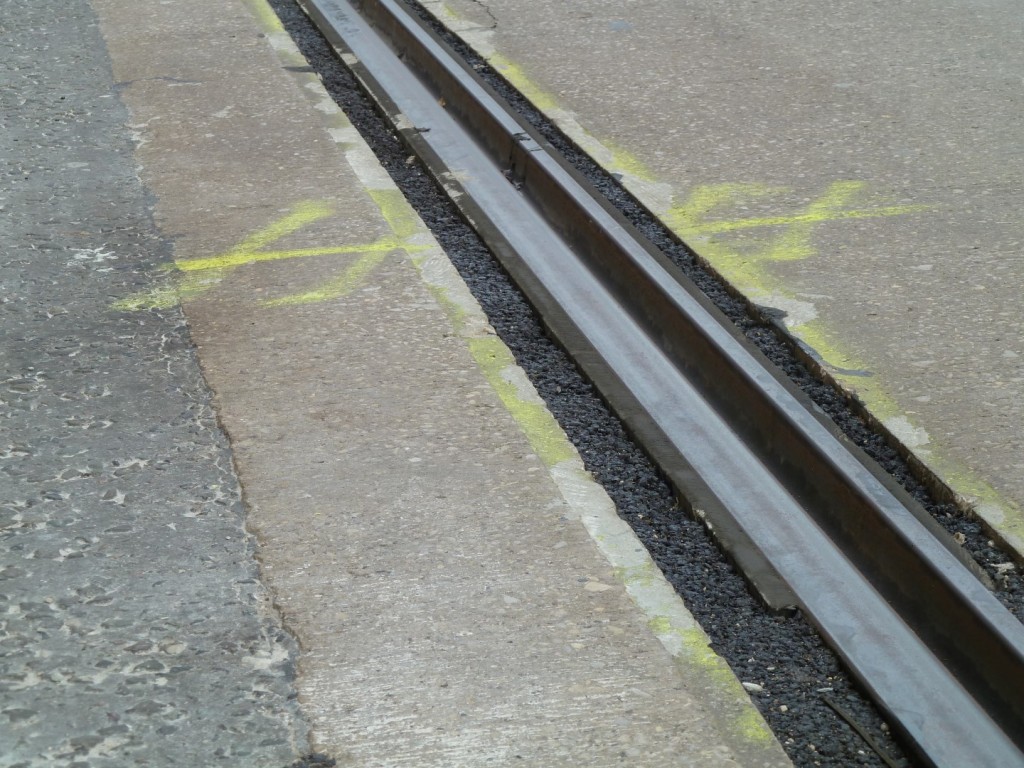 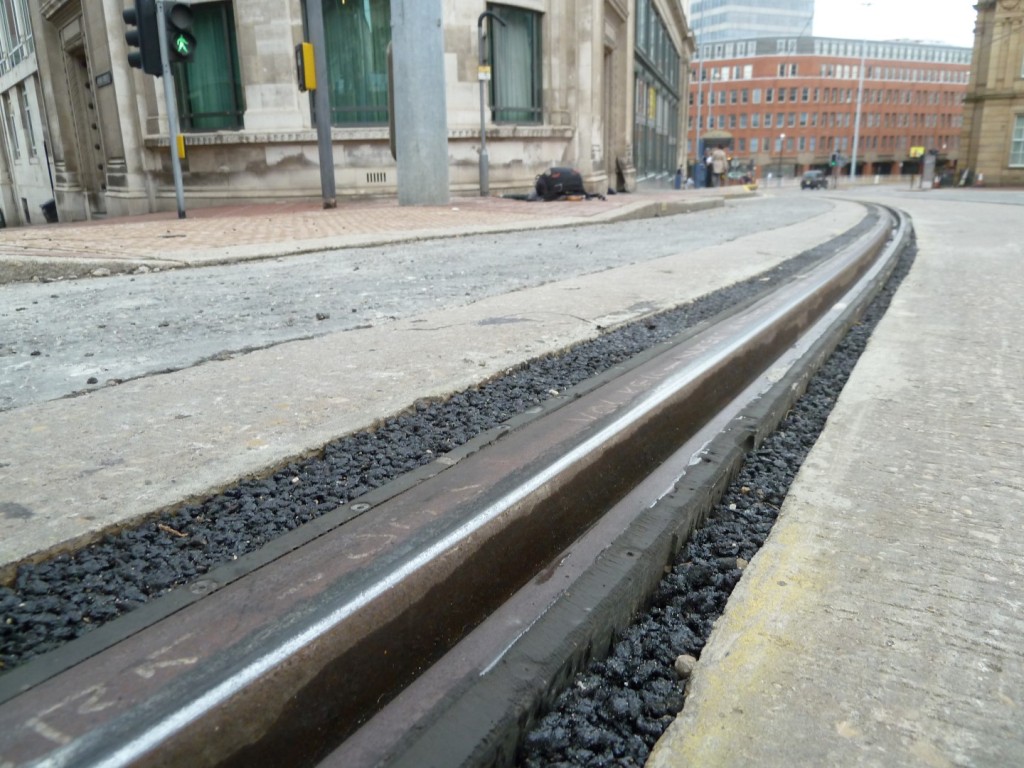 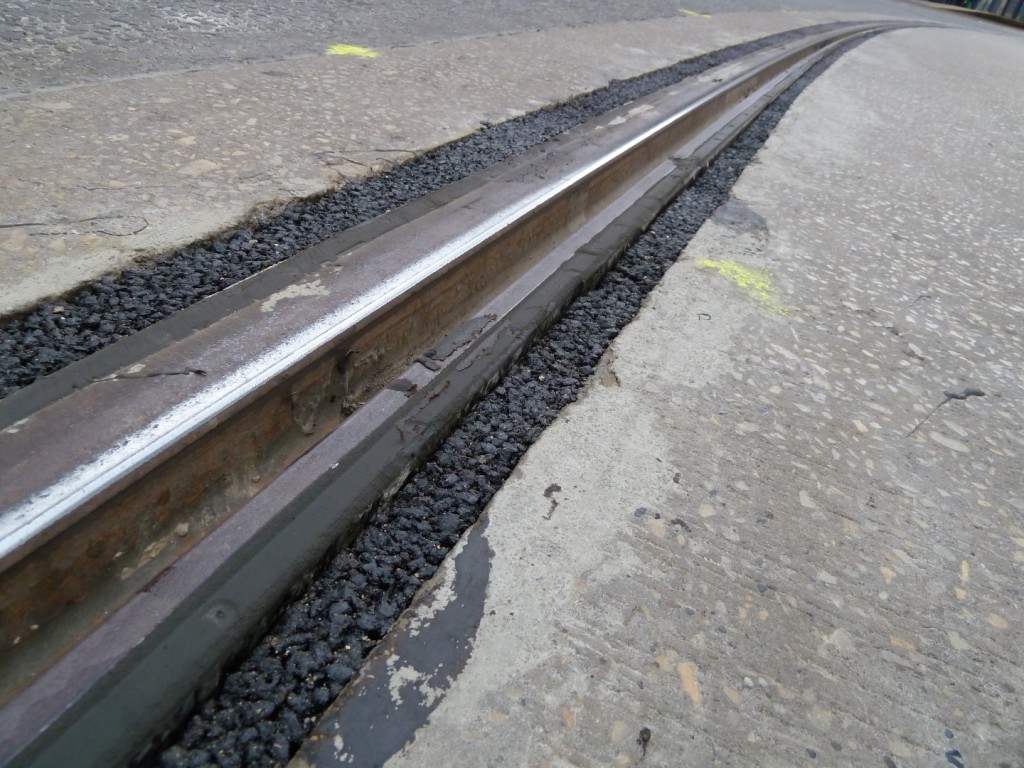 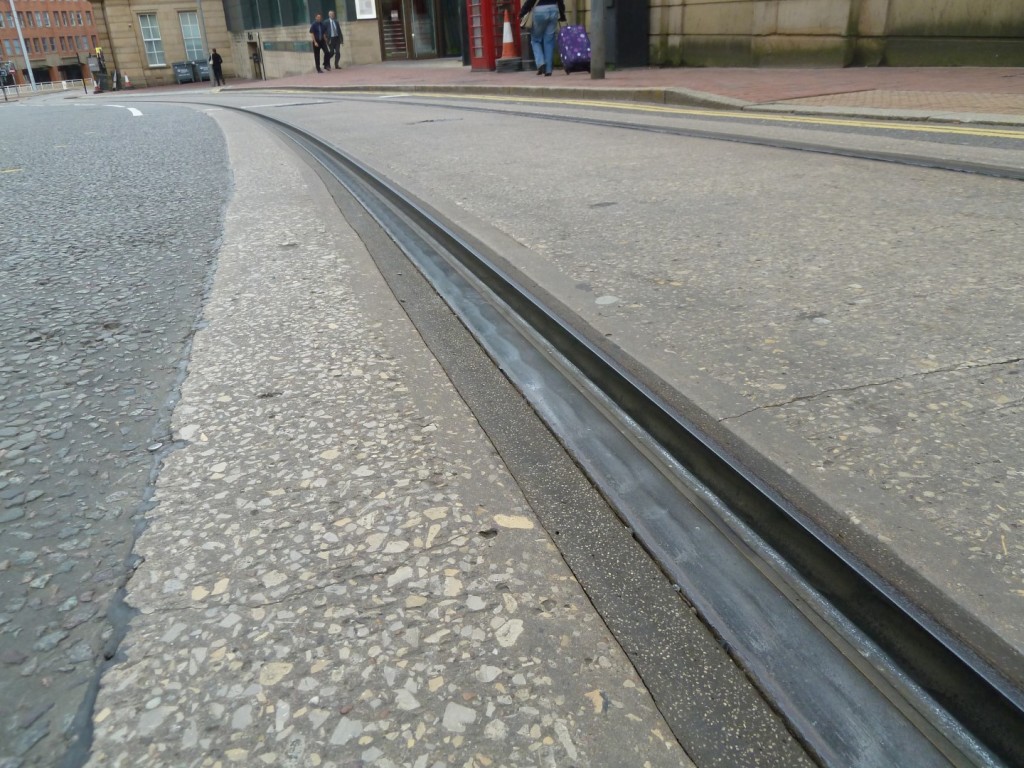 It is now extremely dangerous to cycle around these tram tracks. There are now huge grooves running in the direction of travel parallel to the tram tracks. When cyclists comes across these they will be in serious danger.

Who is responsible? All of the companies charged with maintaining our roads. Stagecoach Supertram, South Yorkshirie Passenger Transport Executive, South Yorkshire Integrated Transport Authority and Sheffield City Council. All the responsible authorities should be ashamed of themselves for taking this insane risk with the safety of anyone who cycles along this road. 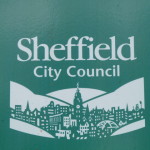