The new Sainsburys opened this week in Hillsborough near where I live in Sheffield. I thought I’d cycle there, film it and do some commentary.

It’s almost comical just how bad this journey is by bicycle.

As the planner/engineer said in the council meeting where the highway design was approved, “No one’s going to cycle to the supermarket. Absolutely right, when the environment is this bad for cycling, no-one in their right mind would.

Never ever believe anything from Sheffield City Council without double checking the facts and confirming it for yourself.

Case in point, the Penistone Road Pinchpoints scheme. We’ve been lead to believe that funding was restricted to reducing congestion for motor transport and could not be spent on cycling or walking. This is not true and these statements were extremely misleading.

The motor centric nature of transport planning in Sheffield is deeply entrenched and needs to be challenged at every opportunity.

Investment need not be restricted to roads and can include investment in cycling and bus infrastructure to help reduce congestion on road networks and/or demonstrate the links to growth.

John Bann responded that he took on board all the points raised in relation to cycling and pedestrian facilities. The scheme was possible because of funding from the Government specifically targeted at easing congestion through easing the traffic flow and helping bus services.

I think it must be remembered that this scheme is being largely funded from the Government’s ‘Pinchpoint’ programme, which as the name implies is aimed at relieving localised congestion. In this regard there are some benefits for private vehicle users but really only in terms of better capacity at junctions, not in terms of additional lanes or higher priorities… For the above reasons it is fair to say that the funding is not specifically for cyclists and pedestrians but we do feel that we have managed to incorporate major benefits for both these user groups…

Councillor Leigh Bramall commented that part of the problem in relation to the objections raised was around the way that the funding came through and what the Government required it to be used for. Improving bus times and viability was a crucial element to the scheme as, after the Parkway, this was the major traffic corridor into the City.

It isn’t the perfect cycle orientated scheme but it was never going to be-the funding restrictions saw to that for a start.

Next week Leigh Bramall is due to make a decision on whether to compromise a cycling route. He has two options.

Option 1 – Go with the original plans, ban a left turn into a side road and improve crossing the side road for cycling and walking. A toucan crossing is introduced which will be green approx 75% of the time (estimated)

Option 2 – Abandon the original plans, leave the manoeuvre permitted, permit vehicles to turn into the junction 100% of the time in direct conflict with people crossing on bike and foot. Don’t provide a toucan crossing and make the central island a bit bigger instead.

The officers at the council are recommending abandoning the plans because it will delay traffic too much and businesses think people need to be able to drive everywhere using the shortest route! Surprise surprise!

The prohibition would enable the road layout to be amended so that a pedestrian and cyclist demand-stage could be incorporated into the traffic signals phasing without adversely affecting the main A61 corridor. It would also mean, however, that traffic travelling to businesses on Herries Road South, or wishing to travel back north via Herries Road South and Herries Road, would have to travel a longer and arguably more tortuous route.

Without the prohibition the road layout could not be appropriately changed to incorporate an additional demand-stage without adding a signal stage, which would have a negative effect on the operation of the traffic signals. This would lead to estimated increases in journey times of up to an additional 56 second per vehicle.

This junction is on a route designated by our statutory local plan as a cycling route to be improved and yet council officers are recommending compromising the safety and convenience of anyone using it on a bike. Why do we even have to campaign on a route that is designated as such in the local plan!?

Apparently it is funded by the Government’s Pinch point fund which specifically for tackling motor vehicle congestion not for cycling provision. If cycling had been included we would not have secured the funding.

I think it must be remembered that this scheme is being largely funded from the Government’s ‘Pinchpoint’ programme, which as the name implies is aimed at relieving localised congestion.

How is this fair? Providing signalised junctions for motor traffic, but neglecting to do so for anyone on foot or on a bike? Why does motor traffic get to have a traffic light phase but other users don’t, they’re just being abandoned at the place where they need protection the most, at busy junctions!

Leigh, if you approve this, then you might as well tear up your transport policy, your cycling policy and your planning policy. You’re sending out a very clear message that cycling is not important and that Sheffield Council simply don’t give a damn about anyone not in a car.

Update 20th March 2015: A couple of months ago now I attended a meeting with Leigh and a few engineers where it was explained that there would not be a signalised crossing put in place here. They think that by banning the left turn, it would be too hard to drive to adjacent properties and a £200,000 roundbout would need to be installed at a location a little bit further up the road to mitigate. And they think that by putting in an on-demand push button crossing that this would cause excessive delay and congestion and tailbacks.

So, the decision has been made to not put a signalised pedestrian/bike crossing here.

Part of the Penistone Road Pinch Points & Better Buses scheme is across the two main desire lines to Hillsborough college. From Hillsborough and the public transport interchange there, and from the bus stop on the west side of Penistone Road. You can review the scheme drawings here.

The design decisions made for this junction show complete contempt for anyone walking or cycling to college (or accessing the Penistone Road cycle track). It’s abundantly clear  that when designing this scheme Sheffield City Council had zero regard for their needs and have given zero consideration to their needs. 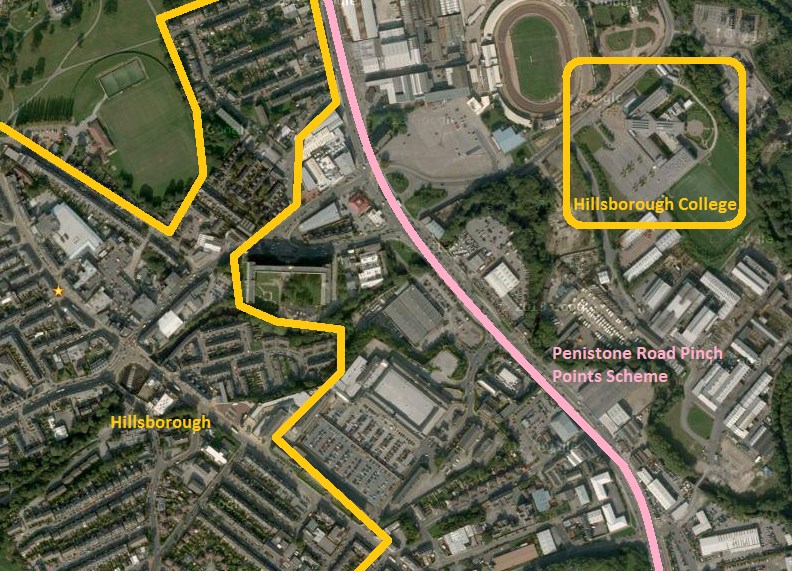 The desire lines look something like this. The crossings over Penistone Road that pedestrians and cyclists can use are numbered. 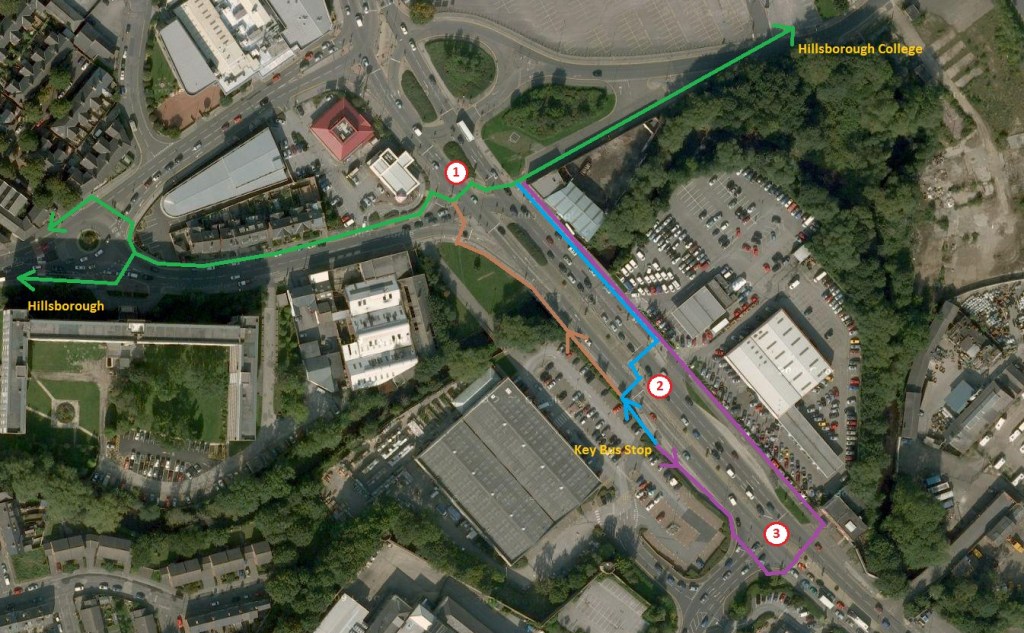 The biggest impact for these users is that the crossings over Penistone Road have been changed.

So, with crossing #2 removed, crossing #1 is now significantly overloaded and hasn’t been designed for the volume of people using it. This photo shows just how bad it can get. People have to wait on intermediary islands because there’s not enough space on the next. A bit like the computer game frogger!

This video shows the impact on crossing #1 since crossing #2 has been removed.

In summary this video shows.

Crossing #3 has been introduced. It is a 4 stage crossing, the first two stages are unsignalled (one has a crossing phase, the other doesn’t, there are always cars turning in on a green light), the other two stages are a toucan crossing.

It is not on the pedestrian desire line and people who used to use crossing #2 will not use it, it’s in the wrong direction!

Crossing #2 used to take 40 seconds to get across the road, it’s now gone 🙁 And crossing #1? It’s an epic 4 stage crossing, with pens for pedestrians and tiny islands. It takes 4 minutes to get across if you wait for the green man at each stage.

In this video, crossing #2 (removed) is in the top left corner. Crossing #1 is in the main window.

So, in summary: Not good at all.

The solution? I’ll quote from the Sheffield University Masterplan

The experience of walking or cycling around the campus is not a positive experience. Car movement prevails, and the Masterplan must give maximum priority to redressing this imbalance.

Alignement of crossing points to be direct and generous, eliminating staggered crossings

During the past week Sheffield City Council have approved outline designs for the Leppings Lane junction on the A61 in Hillsborough, Sheffield to reduce congestion due to extra traffic using a new Sainsburys supermarket. The design was due to be fully approved however issues raised by CycleSheffield meant that the Cabinet Member making the decision was not happy with the provision for bicycle traffic.

The design was however approved “in principle” and the council have offered “a future meeting to look into the cyclists’ concerns”.

I’m pleased that our concerns resonated with the decision makers however I’m concerned with the attitude that an adequate solution can be found at the very end of the design process after the main highway design is complete and approved.

END_OF_DOCUMENT_TOKEN_TO_BE_REPLACED 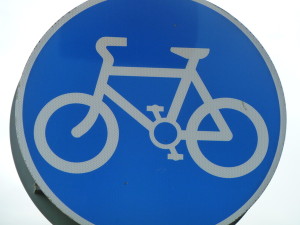 Today I was speaking to someone about a proposed highways scheme in Sheffield. I said that the bicycle route was inconvenient because to turn right into a side road from a main road there were five toucan crossings on the bicycle route whereas the road has a slip lane with one traffic light.

Confident cyclists can always use the road

Installing a cycle route that is less convenient than the road will not be used by existing cyclists who are used to convenient routes and dealing with hostile traffic.

Installing a bicycle route that is less convenient than the road will not encourage drivers to go by bike as it is more convenient to drive.

Making convenient routes that are only accessible to ‘confident cyclists’ excludes new cyclists, the young, the old, normal people nipping to the shops. It perpetuates the current approach which puts the convenience of the private motorcar before bicycle and pedestrian traffic. Roads that create convenient routes for private motorised transport at the expense of bicycle and pedestrian traffic have been designed upside down from the start.

Cycling routes need to be convenient and feel safe, one without the other will never encourage people to go by bike.

On my commute to work I very rarely stop for traffic lights, even when they are red I normally just cycle straight on past the queues of cars waiting at the stop line. I do this all perfectly legally and safely without breaking any rules.

How can I do this? Because I cycle on an off road cycle path where these traffic lights do not apply.

This is a big big advantage that cyclists have over other vehicles, my journey is quicker, I don’t need to start and stop which makes cycling less strenuous, and I make excellent progress along this road.

Lots has been said about cyclists being allowed to turn left on red lights, I do not support this because I think it will encourage cyclists to move up the inside of left turning traffic. However if cyclists are provided with dedicated off road facilities (as I use every day) then left turns and some straights simply do not need to be controlled by lights, cyclists are simply given a path through the junction without ever encountering a stop line.

I’m glad that Sheffield City Council decided to ignore their policy of designing roads for confident cyclists only for Penistone Road because I use this cycle path every day, it feels safe and there are  only two points where I sometimes need to wait.