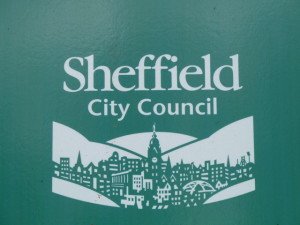 This will be the first in a series of posts about the Sheffield Cycling Inquiry held in 2013/14.

In 2013 CycleSheffield asked Sheffield City Council to hold a Cycling Inquiry which mirrored the process from the national All Party Parliamentary Cycling Group’s Get Britain Cycling Inquiry. The aim was to

review what we are doing in Sheffield and what we can do better, in order to improve the opportunities for cycling

The final report is available here however I’ve started with a review of the process about how we’ve got here.

The Economic and Wellbeing Scrutiny Committee started the inquiry based on some terms of reference.

In September 2013 the inquiry received reports about cycling from various parts of the council.

A summary of the discussions is available on the web here.

The inquiry asked for views from the public via a call for evidence via a webform or by writing in.

260 responses were received, they have been summarised and will be released in full in the future.

The inquiry asked for oral evidence from a group of people including Sustrans, IAM, CycleSheffield, Stagecoach and Supertram.

They discussed these three questions:

And the discussions are documented on the web here.

In February draft recommendations were presented to the committee, who then presented them to Sheffield City Council Cabinet who have asked Leigh Bramall (Cabinet Member for Business, Skills & Development – Including transport) to provide a response in July 2014.

The recommendations were adopted in full by Leigh Bramall at a Cabinet Meeting in July 2014.

People decorated their bikes, towed trailers, played music and came with their children.

Emma Metcalfe from CycleSheffield said “The weather was glorious, and the atmosphere relaxed and happy, with smiling faces as people rode to a soundtrack of music and the ringing of bicycle bells. I think everyone really enjoyed the opportunity to cycle safely with their families“

Riders were answering Cycle Sheffield’s rallying call to demonstrate their hunger to see Sheffield become a cycling city, where riding a bike is safe and accessible for everyone, and for Sheffield’s councillors to commit to making space for cycling. The day was full of personal stories. One lady said that she didn’t own a bike because she was too scared to ride on the road on her own, but had heard about the campaign and borrowed a bike especially to join in! One of the smallest riders wore a poignant placard saying ‘I want to cycle safely in Sheffield’.

The Space for Cycling campaign calls for protected space for cyclists on main roads and through junctions, improved conditions on residential roads through reducing through motor traffic & ‘rat running’, safe segregated routes in the city centre & beyond, and for all Sheffield children to be able to cycle to school along safe routes.

Mick Nott, Chair of Cycle Sheffield says “Our Big Ride may well be the biggest bike ride in Sheffield this year and it will certainly be the happiest! For 240 people to turn up and have a joyful time riding through our city together sends a message to councillors that cycling is something that many more people would do if they felt the roads were designed and built better and space and transport planning put the needs of vulnerable road users first.”

“We received so much support from people on the streets and in cars and buses that it shows that cycling in Sheffield will be popular. This is our mandate to say that Sheffielders want Sheffield to be a cycling city NOW; so, Sheffield City Council just do it! The campaign goes on, so join us!”

END_OF_DOCUMENT_TOKEN_TO_BE_REPLACED

Going to the shops, taking the kids to school, visiting friends. These are things we all do regularly, but how about on a bike?

There’s just no way I’d cycle in the city centre, and there’s no way I’d let my kids cycle there either. It’s Too dangerous. (Sandra, Leeds, Understanding walking and cycling)

Our streets are dominated by cars and people are too afraid to travel by bike. People love riding bikes with their friends and family (just look at the success of Centre Parks), however most people are not happy mixing with motor traffic on our roads and fear for their safety.

I just wish I had the courage to use my bike again, but sadly in this wacky town of crazy infrastructure that is in bad condition, and the crazy riders/motorists arguing and bickering about who cut who up I will keep the bike, regretfully in the shed. (aubreyboyce, Sheffield Forum)

We need to change how we think about our roads and transform them into inviting places where people feel safe cycling. By creating space for cycling we can improve our towns and cities, making the places we live less reliant on motor traffic and creating more space for people to enjoy.

I got my cycle out this summer to cycle to the Gym & back after 3 trips I found it too terrifying. Cycle paths start & finish anywhere. I cant understand the cycle path on Saxon road the back of Virgin Gym. (Woodyspatch, Sheffield Forum)

To do this the 6 core demands of Space for Cycling need to be delivered.

To help make this a reality please come along with your friends and family to one of the rides in 2 weeks time on 17th May. Details for the Sheffield event are here. Please take part.

You can also send a message to your councillors asked them to support by filling in this form.

I’m just posting this here for the record!

In Sheffield, including the implementation of new 20mph areas, we are spending over £1m in the coming year making improvements to our cycle infrastructure.

We have set out a policy that will ultimately see all suitable residential areas have a 20 mph speed limit, and the Streets Ahead programme to bring all our pavements and roads up to a good standard will make the cycle offer easier, as well as offering the opportunity for further improvements to our cycling infrastructure.  In addition, we are developing plans for a network of Green Routes that will provide off road cycling routes using our green spaces and parks to provide safe cycling paths along key corridors for commuting and leisure uses.

We have also recently facilitated a Scrutiny Committee investigation into how cycling can be improved in the city.   From this, we aim to identify a single strategic cycle network using both on-street  and off-road routes that will work together to offer safe cycling conditions for all types of cyclist.  Links to the report are below.  The Cabinet of Sheffield City Council has received the report and will be considering the recommendations prior to commenting on the report in July this year.  The Labour Council is committed to continuing to look at this and other ways of improving the city to make cycling an attractive option.