A few years ago the Department For Transport announced £600 million investment for the Local Sustainable Transport Fund, the LSTF.

The biggest funding source for local transport authorities for Sustainable Transport is the LSTF, the fund was designed to pay for projects from 2011 to 2015, there are 96 projects across England. What did the Department for Transport hope to achieve with this? They set out their vision for ideas in this helpful illustration. The suggestions for cycle infrastructure don’t give me any confidence that the LSTF will have much of an impact on cycling. 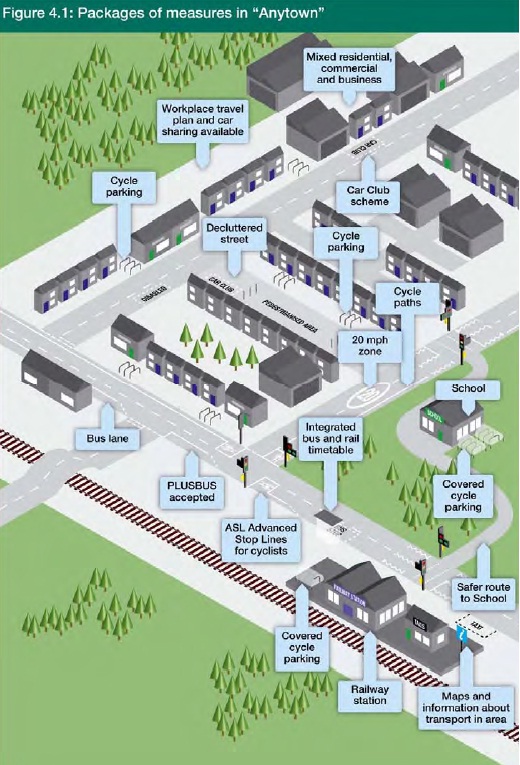 END_OF_DOCUMENT_TOKEN_TO_BE_REPLACED

I’ve been reviewing a few documents from the South Yorkshire Integrated Transport Authority (which cover Sheffield) and was shocked at the cost of some of their cycling initiatives. I’ve collated most of the examples I could find from the LSTF funding bid from 2011, most of these schemes will be constructed/run in the next 2/3 years.

All of these figures come from the LSTF Bid documents which are available here but they’re pretty tough to read! Annex 01 has maps/descriptions and Annex 02 has detailed costings.

END_OF_DOCUMENT_TOKEN_TO_BE_REPLACED

Today I headed down to try and film some taxis blocking the cycle lane, but I came across another set of vehicles using it…

The police have given us assurances that they know it is dangerous to park in this lane, that it causes traffic problems, that they will move vehicles on when they see them there, but I don’t think they are sincere.

“We come out of Snig Hill time and time again and they’re parked. And I can totally sympathise with you going back up towards Angel Street, we move them on for two reasons. They’re blocking the cycle path and they stick out that far into the road they stop buses as there’s a bus stop. They have a knock on effect that they hold everything else up behind them”

“That area comes under my beat area and I’ll pay it some attention, I’ll get down there as often as I can. Unfortunately I cant be there 24/7, it’s just not possible for us we don’t have the man power at the moment to be there all the time.”

Quote from South Yorkshire Police at a council meeting

Here I present my evidence that they are not being sincere:

Census figures released yesterday show that 1 in every 3 households in Sheffield do not have access to a car.

You’d never think that looking at the design of Sheffield, everything is catered to the car.

Lets shake things up and invest in some real cycling infrastructure for the 3rd of households in Sheffield who do not have access to a car.

Lord Taverne: My Lords, does the Minister accept that the bicycle is the most efficient machine ever invented for converting energy into motion and that the bicycle could be accurately described as a green car that can run on tap water and tea cakes and has a built-in gym? Does he therefore agree that it makes sense to base policy for private urban transport on the motto, “Two wheels good; four wheels bad”?

I couple of months ago I highlighted the dangers to cyclists of a new junction in Sheffield City Centre at Furnival Gate/Pinstone Street.

The problem is clear for everyone to see, there isn’t enough room to use both the cycle and road lane with the result that cyclists next to vehicles are dangerously squeezed out.

Warning! This story is long and winding and may induce a feeling of disillusionment and hopelessness. Take a deep breath and prepare yourself before reading, we’re entering the mysterious world of local council highway design!