How do you effectively persuade people to choose a more sustainable mode of transportation?

Is it by telling them what do to? Or are their choices influenced by our streets, our public spaces and bigger structural issues?

When we live in a country designed around the car, are people really free to make their own choices?

For the past few months Sheffield Council has been running a campaign under the title ‘Air Aware, What You Do Makes a Difference’ (Twitter, Website).

We want to help make everyone in Sheffield more air aware so that you can make choices which help to protect you and your loved ones.

I think that what the council do makes a much bigger difference, the council needs to be more air aware so that their choices help protect the people of Sheffield.

Putting the emphasis on changing individual behaviours through a campaign like this is a distraction and a waste of time. This is why I’ve created a series of new images with the strap line ‘What we do makes a difference’, we being Sheffield Council. 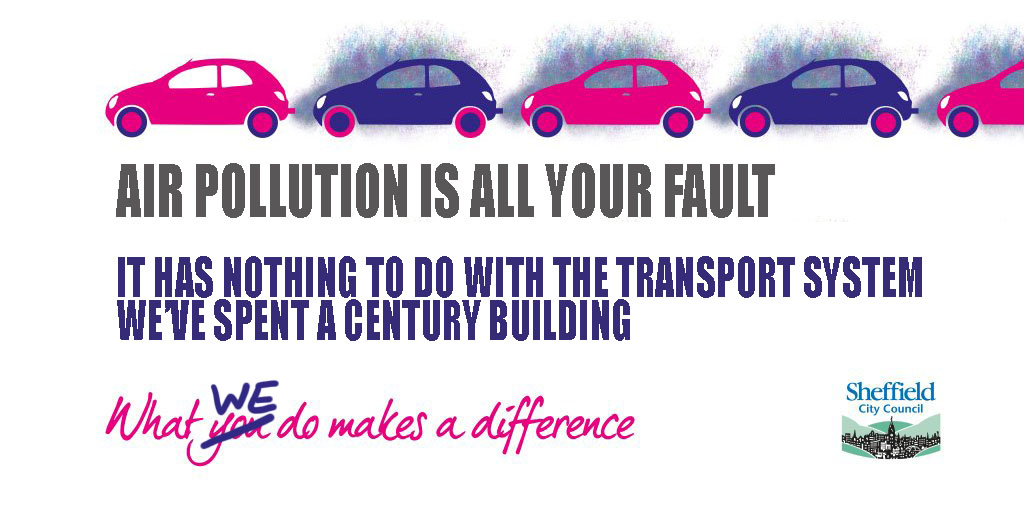 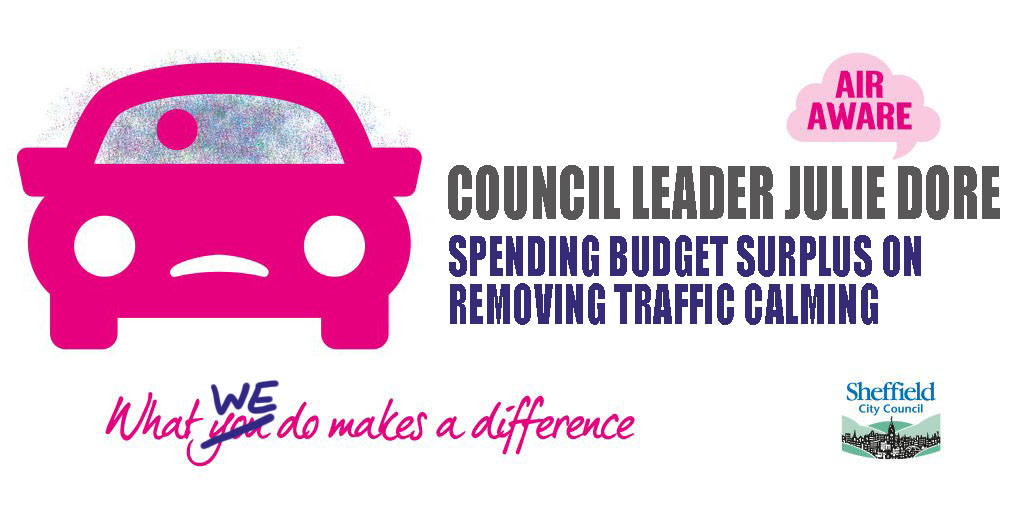 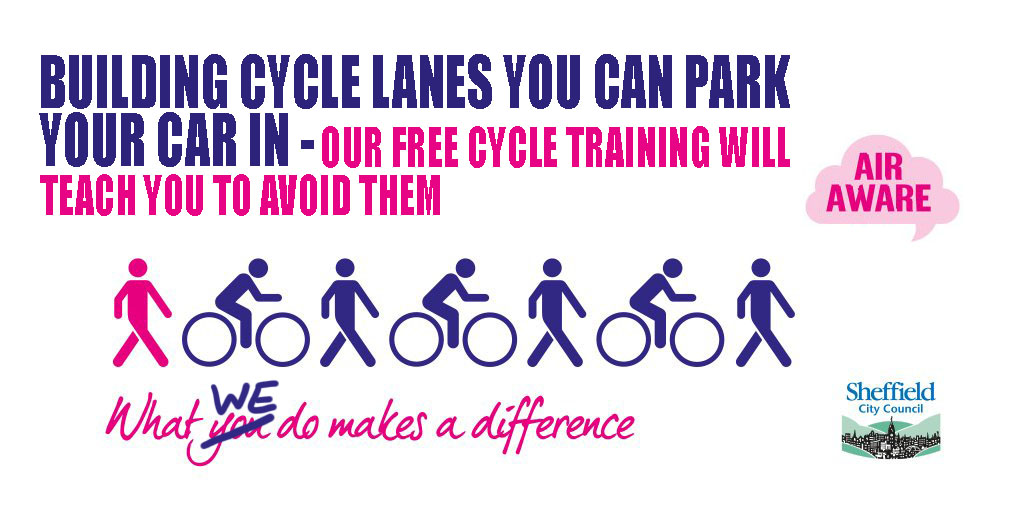 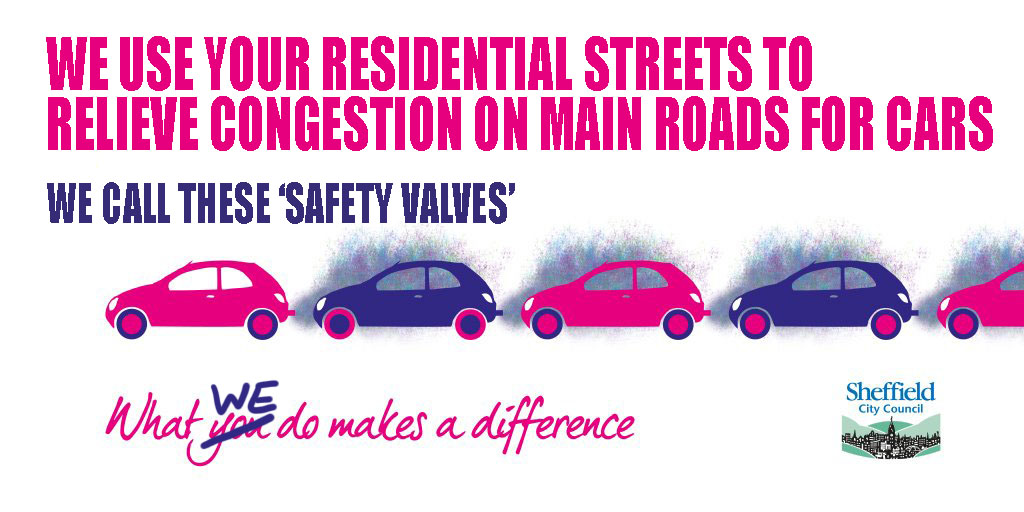 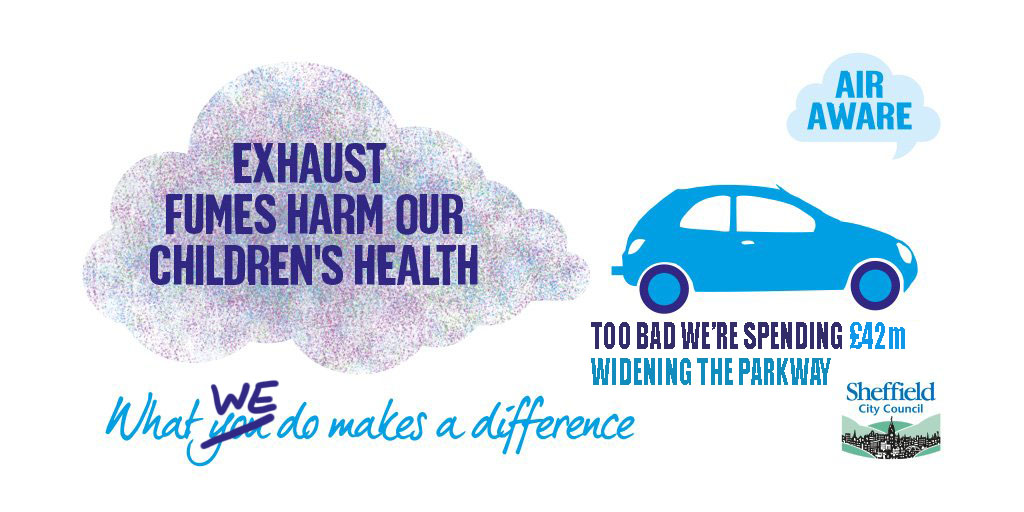 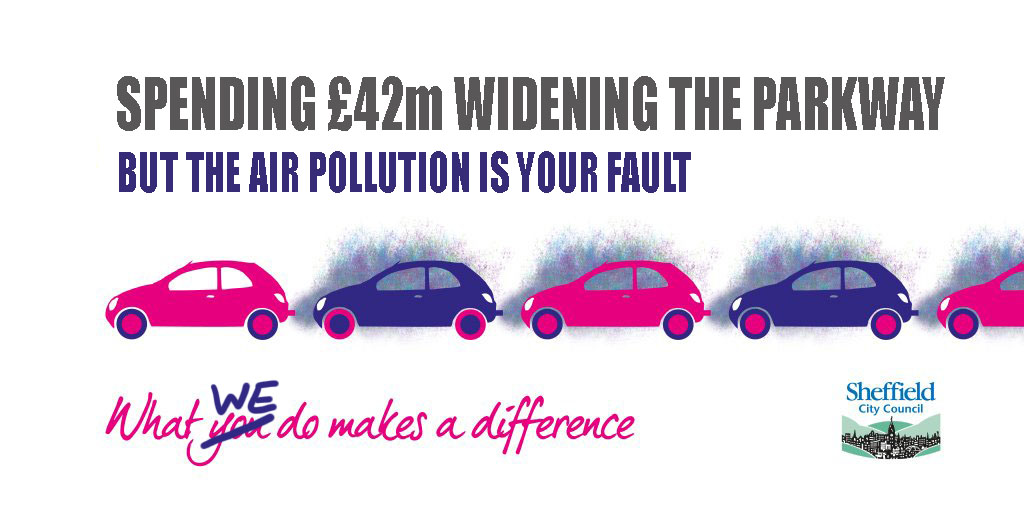 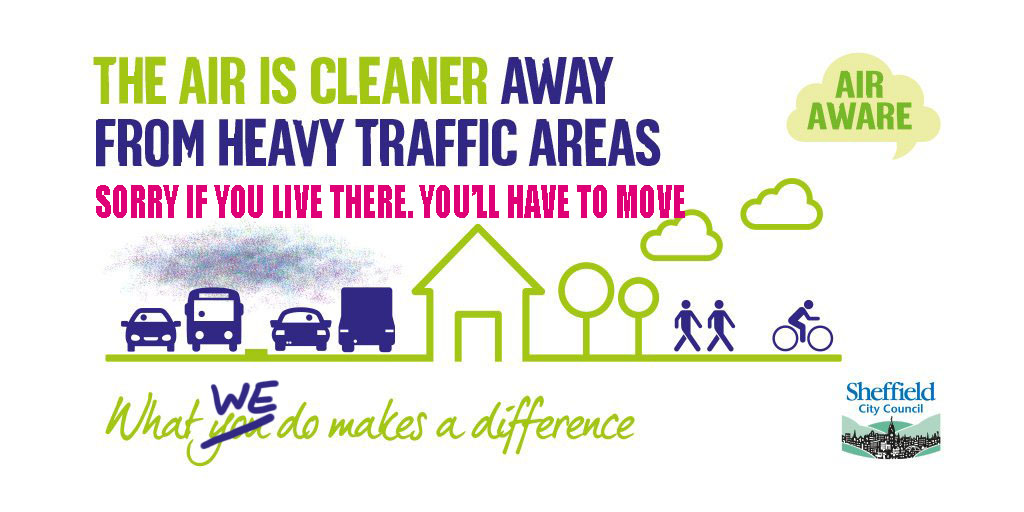 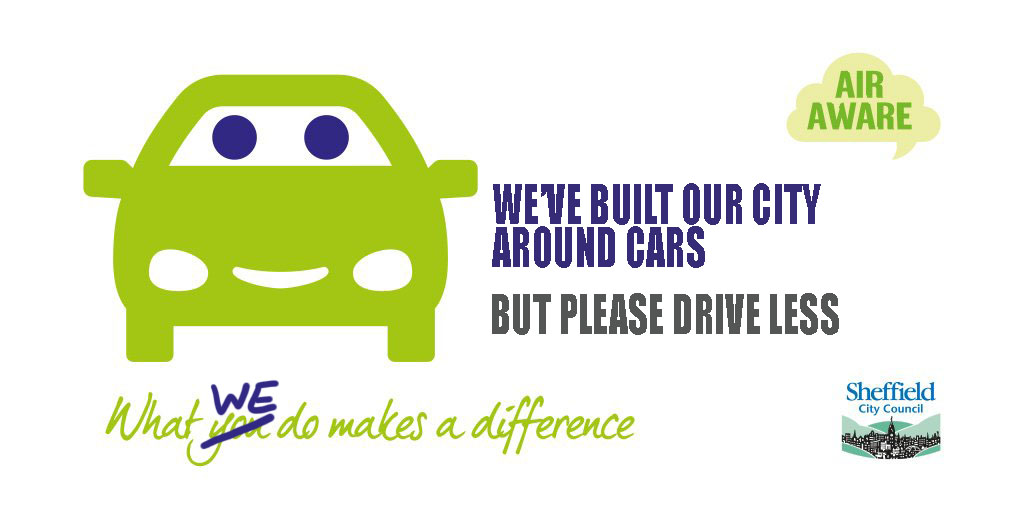 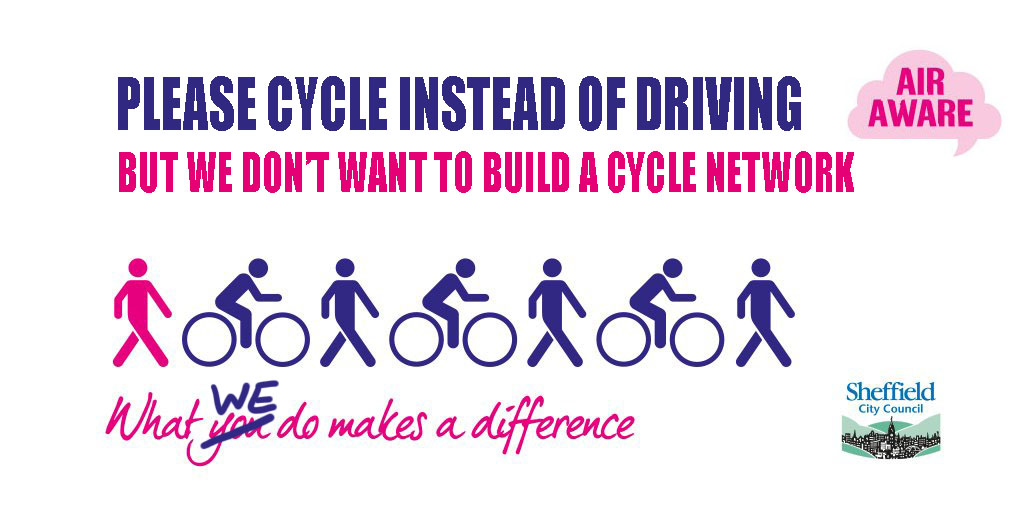 These are the original images.

The latest Sheffield Council report into the dangers caused to cyclists by the city’s tram lines has been a long time coming. Commissioned in July 2014, issued to the council in Sept 2015, and published in June 2016. After almost 2 years of work, the report should be impressive, but sadly it’s deeply disappointing and its severely lacking in a number of key areas outlined below. You can read the full report here.

Converting footways to ‘shared use’: lumping people cycling in with people walking to the frustration of all

Suggested road layout changes focus on converting existing footways to ‘shared use’, with a presumption that cycling space must come from existing (limited) pedestrian space. Reallocation of space away from motor traffic is not given a single thought, and the creation of dedicated cycle ways is noticeable in its absence.

None of the provisional layout changes create cycleways, they just lump cycling in with walking, on the footway. It is a cycling report inspired by LTN2/08, widely considered to be obsolete and far behind recognised best practice in designing for walking and cycling.

There seems to be a fundamental misunderstanding of how Dutch tramways reduce danger,  referring to sustainably safe junction layouts as ‘road markings’. The examples from the report below are shown as ‘road markings’ even though they clearly show separated cycle tracks, which provide clear routes across junctions with embedded tram tracks. The layout of these junctions has been designed to be as safe as possible, it’s not the ‘road markings’ that mean that these are safe, and cherry picking and replicating ‘road markings’ alone will not create a safe solution.

…And the best Dutch examples are missing

It’s disappointing that a detailed review of the best high quality cycle infrastructure around tram lines was not included. This example is from Utrecht.

No funding, nor any plan to seek it

Funding is non existent, there is no funding plan to go with this report.

The report fails to mention the approximately £5 million currently being spent on tram line replacement and fails to identify opportunities from that project to improve the safety of cycling around tram lines.

Failure to look at the bigger picture

This report contains numerous missed opportunities. One if its real shortcomings is its failure to view the tram system as part of the wider street and transport network. Only very immediate localised changes have been proposed (e.g to tram stops, or the roads which have rails themselves), which fail to identify opportunities such as the potential use of service roads alongside tramways as cycling infrastructure. This is something commonly seen in the Netherlands and other European countries.

We know the council can do better, we’ve seen better designs in the past. The report doesn’t include the visionary design of the crossing of Upper Hanover Street tram lines, perhaps the best piece of cycle infrastructure design to have ever come from Sheffield Council. It’s not even mentioned in the report. (I’m sorry, I don’t have an image for this and I don’t think it’s been published and I think the design was later watered down citing concerns over motor traffic gridlock).

Shifting the blame for under-reporting of incidents

The report states that ‘adequate data for cycle incidents in relation to crossing tram tracks in Sheffield is almost non-existent’. This is true, but it sets the blame squarely on the shoulders of cyclists, saying ‘these single person accidents tend not to be reported to the Police’ and ‘the only accident data available is when cyclists report incidents to SCC, SYPTE or Supertram… under-reporting of these types of incidents could be significant’.

This is a misrepresentation the situation. Research by CycleSheffield has found that when cyclists report these crashes to the police, they often refuse to accept the report. The Sheffield Council cycle forum has even sent a letter to South Yorkshire Police expressing concern at their failings to record these crashes. Another route is to report incidents to the Council or Supertram but people are often fobbed off just the same (as documented by CycleSheffield).

“I tried to report it to the police via 101 and they insisted that it was not reportable.”

“Supertram, they were not in the slightest interested and told me I should have gotten off my bike and walked across the junction.”

The blame for a lack of data lies squarely with our local authorities.

If you’ve crashed on the tram lines then report it at tramcrash.co.uk which is run by CycleSheffield. They collect the information and anonymously share it with whoever needs it (including Sheffield City Council). They have created an up to date map of all reported crashes.

So, to sum up, very very disappointing. I hope that CycleSheffield are able to put pressure on Sheffield City Council to improve this report. As a proven major cause of injury and distress, cycle crashes on Sheffield’s tram tracks should be taken seriously. Sheffield City Council says it wants to increase the number of journeys made by bike in the city, now we need some action to prove it.

And they have, the report has been pulled from the council meeting agenda pending further discussion.