If you feel strongly about this, please join me in taking direct action as part of a protest on 22nd March. Facebook event here.

When a football match takes place in Sheffield at Bramall Lane, coaches carrying fans need somewhere to park. This task is managed by South Yorkshire Police who direct them to park along Asline Road cycle track. This is part of the Sheaf Valley Route and is one of the few safe ways to avoid cycling along the terrifying Queens Road or London Road. 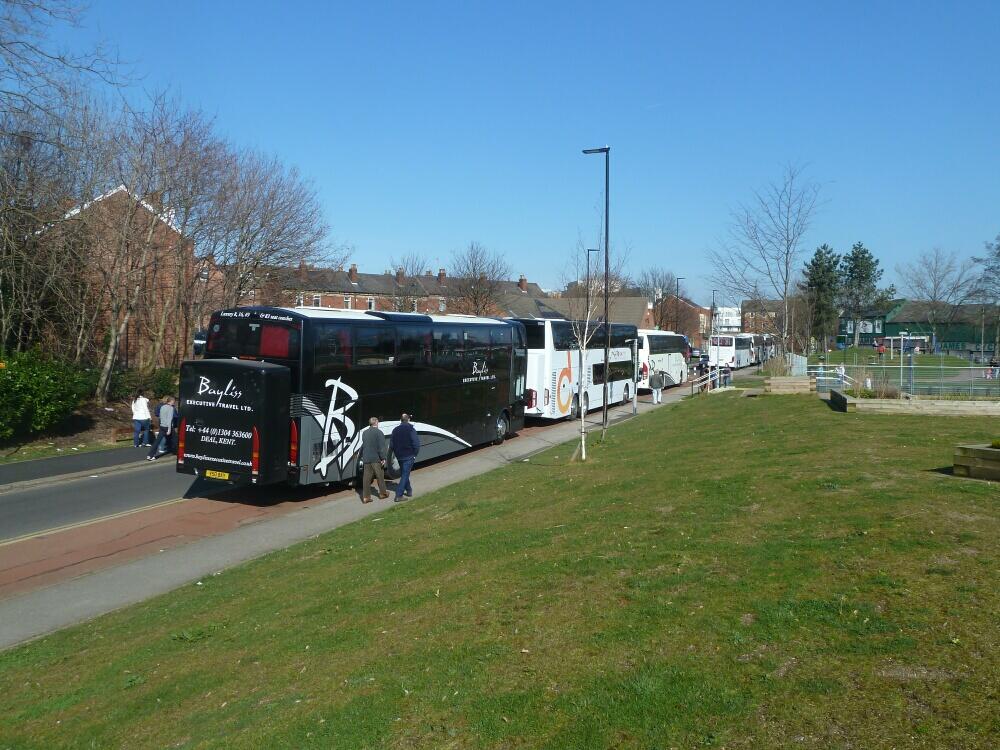 Official Twitter feeds have stated that the cycle track subject to a road closure order (it is not), and that they will try to park the coaches somewhere else (they haven’t) and that it is for public safety (presumably excluding people on bikes).

@SB_HH_JC Thanks for yor msg. Asline Rd is coach holding area. We ensure safety always and its also part of the road closure plan.

@Mattturner86 @syptweet Hi Matt. We plan to put coaches on other roads to avoid cycle lane as much as possible.

@Mattturner86 @syptweet @cycleSheffield @SYPCC We are moving coaches. Were put there for public safety

Whoever posts on this Twitter account on behalf of South Yorkshire Police needs to stop talking rubbish and making stuff up!

The Inspector with responsibility for the South Yorkshire Police Operational Planning Unit has written to me about this. You can write to him too, he’s on Twitter.

the twitter feed you refer to was an error of understanding in terms of the road closure order, this does not actually cover Alsine[sic] Road. You are quite right to point out that the parking of the coaches in that location is inappropriate.

Parking of coaches on Asline Road has been custom and practice for many years however I appreciate that this doesn’t make it right to block the cycle path. As a result of recent contacts I am aware that some of my team have been working with Sheffield United to resolve this issue and I have been seeking the considerations of the safety advisory group.

I will be able to update you further in the near future but for now please be assured that we are working on this and will seek a solution that does not compromise the cycle path.

This letter was back on the 6th Feb. One month on, the police are still directing visiting coaches to park on Asline Road cycle track. This video shows that the coaches are given a police motorbike escort from the football ground to the cycle track.

So, my question to Neil Mutch, Operational Planning Unit Inspector, when will your operational plans comply with the law and stop endangering people who ride bikes?

I doubt South Yorkshire Police will change their ways any time soon, or that Sheffield City Council will step up to the mark and prevent South Yorkshire Police from breaking the law. If the authorities won’t act then we must take a stand. This weekend – Saturday 22nd March – we will protest against the abuse of Asline Road cycle track. The cycle track will be occupied by cyclists and will not be available for parking coaches. We will ensure that it remains open for people to cycle on. It’s insane that these extreme measures are necessary to ensure that a cycle track remains unobstructed, but it seems that this is all we have left.