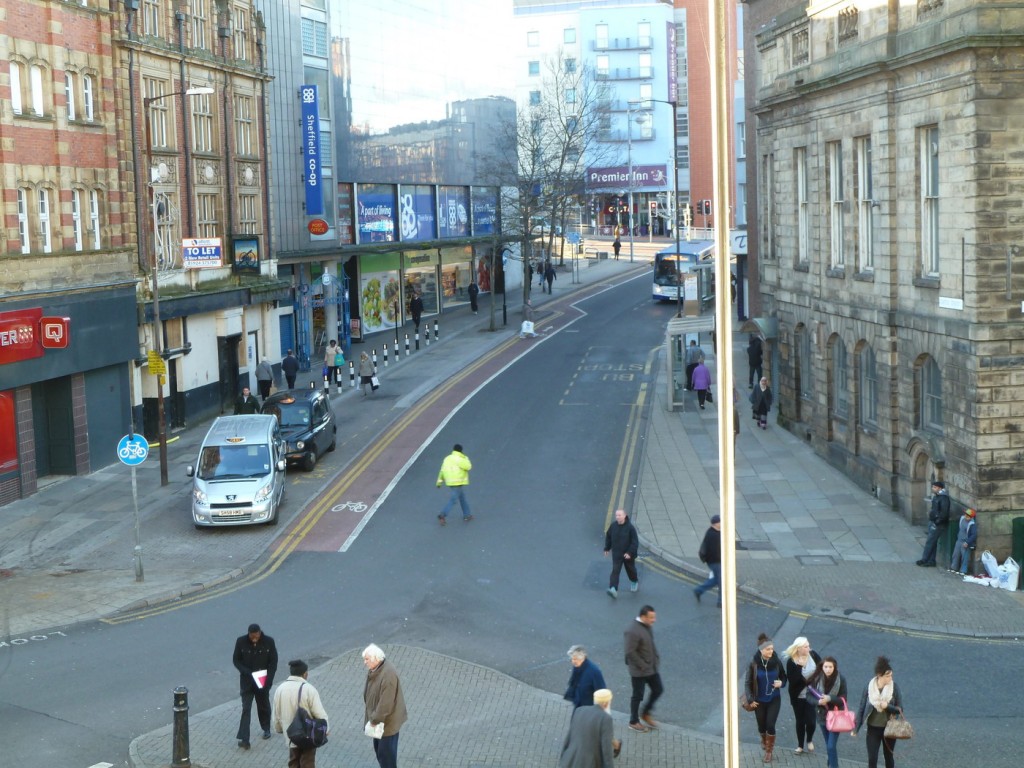 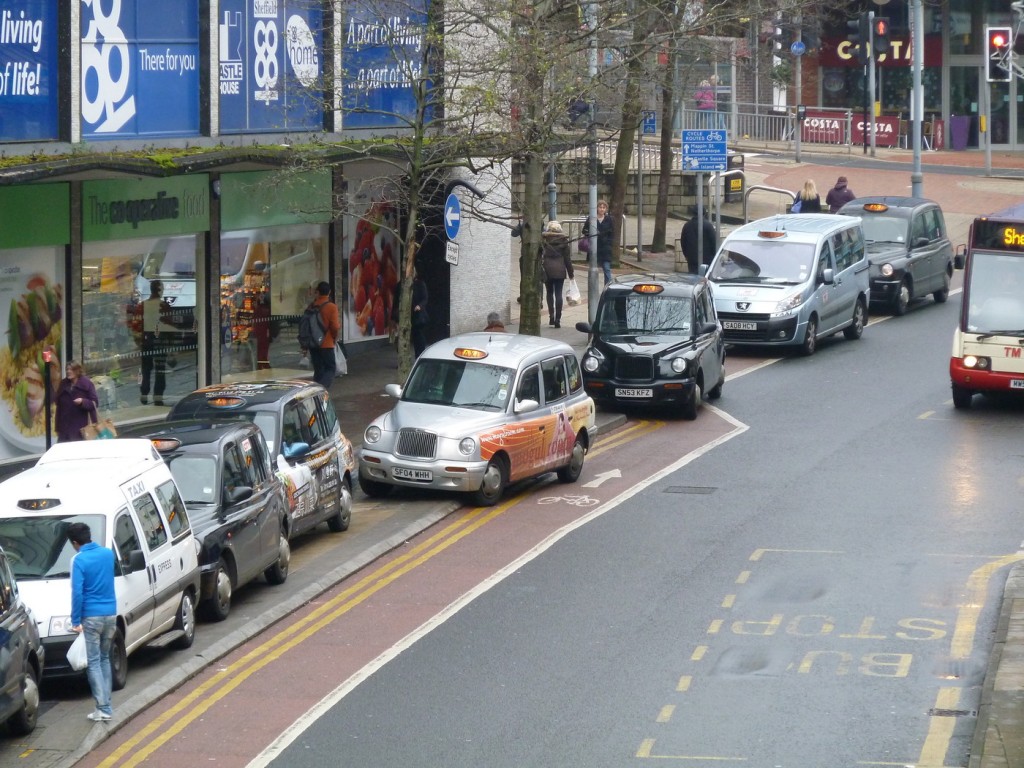 So, for the past couple of months I have been spending my lunch hour documenting this and trying to change the conditions on the road for the better. I document between 6 and 10 offenses each day, sometimes more, sometimes less, parking in this location is rife and there are very rarely a shortage of taxis to take photo’s of.

I have taken hundreds of photos, some discretely, some openly and some in the face of agression from angry taxi drivers. I have been threatened, the police called, called a racist, I’m just doing this for kicks, to get a buzz, invasion of privacy and have been openly intimidated by large groups of taxi drivers. I have now taken to taking photo’s very discretely, after being driven at by one of the drivers last week (the police refused to take a statement and referred me to the taxi licensing office), I avoid being seen at all costs.

I have reported 145 instances to the local council Taxi Licensing office. They only accept reports in writing so I am unable to phone, I report all of the taxis I see parking illegally via email to [email protected] individually. I attach a couple of photo’s and give the number plate and license number of the vehicle.

I wish to report a hackney carriage parked on an area of road designated as a mandatory cycle lane and marked with double yellow lines.

The attached photo’s show vehicle SK03 BWE – 974 parked on Castle Street illegally. They were taken at approximately 13:08 on 27/11/2012.I would like this investigated and am happy to be asked to provide a statement if required. 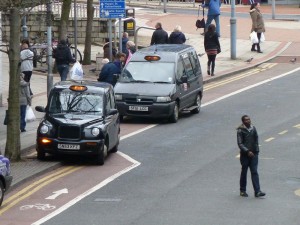 Of my 145 reports I have received 4 acknowledgements, they are all the same and use the exact same wording.

From: [email protected]
Taxi Parked on Castle Street
Thank you for your e-mail regarding the above.
The licensee will be contacted and appropriate disciplinary action considered.
Regards
The Licensing Service

I report to Taxi licensing in the hope that they’ll actually discuss this with the driver and possibly remove his license if there is repeat offending. I’ve been told though that this is VERY unlikely to happen based on a parking offence alone.

I maintain a spreadsheet of each report, it shows that I have caught the most frequent offender 8 times so far (with another report waiting to be sent from last week). The spreadsheet is available here.

I also call the council Parking Services team about this. They accept phone reports and are very good at sending a parking warden out straight away. I will see them walking up to the taxis, waving them on, the taxis move on and then the parking warden leaves. 5 minutes later the same vehicles are back in the same spot after driving around the block. The drivers are not given tickets, not fined and the enforcement only seems to happen whenever someone phones. I have never seen a parking warden in this area without me first calling them. The department get annoyed when I phone them multiple times each day because their warden has come and gone and the taxis are back.

The police are interested in this matter, but not in a positive way. I have had the taxi drivers phone them on a number of occasions complaining about me taking photographs. The police seem to ignore the illegal parking with the excuse “That is the responsibility of Parking Services at the council”, they ask me to leave because I’m agitating the taxi drivers by documenting their parking. Thanks South Yorkshire Police, you’re a great help! 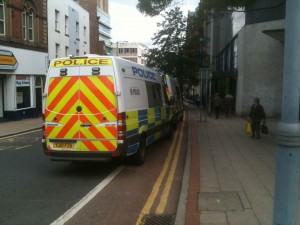 The police seem to think that it is OK to park in this lane as occasionally we get photo’s of them parking in exactly the same location. Why not use the South Yorkshire Police Headquarters car park which is opposite?

This issue has been frequently raised at the Sheffield Council Cycle Forum meetings, the response has always been that it is the cyclists responsibility to report these issues. This I find completely disgusting, it is the responsibility of the council to investigate issues raised to them at an official council meeting, they have repeatedly refused to do this and insisted only that we need to report individual offences.

At the last Cycle Forum on 20th November 2012, Castle Street cycle lane was on the agenda for the first time in quite a while, I assume fuelled by my and CycleSheffield’s attempt at some sort of campaign. Some of the statements from the council and the police were frankly unbelievable.

“Sorry, why can’t you take a photograph of the person?” – Me, shocked!

“Because that is infringing their rights”

This advice is incorrect, I’ve had it confirmed by South Yorkshire Police, the National Policing Website and the Information Commissioner for England.

“We come out of Snig Hill time and time again and they’re parked. And I can totally sympathise with you going back up towards Angel Street, we move them on for two reasons. They’re blocking the cycle path and they stick out that far into the road they stop busses as there’s a bus stop. They have a knock on effect that they hold everything else up behind them”

“That area comes under my beat area and I’ll pay it some attention, I’ll get down there as often as I can. Unfortunately I cant be there 24/7, it’s just not possible for us we don’t have the man power at the moment to be there all the time.” 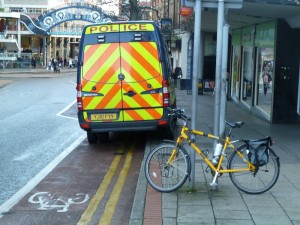 No Dick, the taxi rank is in the wrong place, its the opposite side of a contraflow lane, the drivers frequently park well beyond it. When you say it is where people wan’t to be, I’m assuming you mean it is where the taxi drivers want to be? This is not a good reason to put a taxi rank in a location! You cannot argue that it is in the right place because there is no-where else for it to go, that is a rubbish argument!

Thanks for that little dig at the cyclists. We really love it when people do that, perhaps your next point will include some more of that bad attitude?

“You cannot legally cycle to that cycle lane, yes Mick’s right that in the longer term you’ll be able to cycle to it. But you cannot legally cycle from Exchange Place, you cannot legally get to the start of that cycle lane without starting the wrong way up a bit of one way street”
“Oh course you can, you can come up Waingate and turn right” – Mick Nott, Chair of Cycle Sheffield
“It kind of goes back to what I was saying where people take advantage where they can or where they think they’re doing the right thing when in fact their not. Now I did say you cannot cycle to that lane, yes you can dismount”
“I’m sorry Dick for using that cycle lane if it’s illegal” – Me, very frustrated!
“No, I’m not saying that you shouldn’t cycle up there, I’m quite happy that you do cycle up there as long as you know the risks. The point I’m trying to make is, yes there are taxi drivers breaking the law but I’m also making the point that cyclists cycling in that lane are also breaking the law.”
“Now it’s quite clear to me which one of is most dangerous, the taxis parking there is clearly the most dangerous because it’s forcing the cyclists into the oncoming traffic. But if a cyclist chooses to cycle those first few meters up to that cycle lane the only person who’s going to get hurt is the cyclist.”

Ah, there is the real crux of Dick’s point, why are we talking about this when cyclists are breaking the law? Why enforce no parking in cycle lanes when cyclists break the law? I have heard this argument before when trying to report a taxi parked in the lane to the licensing office on the phone, they asked me how I’d got to the cycle lane on a bicycle because it was illegal.

Well Dick, as part of the council who designed and installed that cycle lane, the risks that cyclists face when they cycle along this lane have been engineered by your department, not the cyclists using the cycle facility, but by poor placement of a taxi rank, bad cycle lane design and illegally parked taxi drivers.

So, the Transport and Highways department at the council send Dick Skelton to the Cycle Forum, he has some strange ideas about the legality of using this cycle lane and talks irrelevantly about the law breaking of cyclists when we’re supposed to be discussing how to resolve the illegal parking in cycle lanes! How helpful.

One good piece of news is that a parking enforcement camera car is coming to Sheffield in the new year, hopefully this means that there will be some tickets given out at this location. I’m not convinced that in the past decade many tickets have been given out at this location but have submitted a freedom of information request to find out. http://www.whatdotheyknow.com/request/parking_offenses_castle_street

So, on a more positive note, we have been lobbying councillors on this issue to try and get some political pressure on this. I’ve been copying in Cllr John Robson and Cllr Clive Skelton who are the chair and deputy chair of the licensing committee at Sheffield Council. This must have been noticed because I received this email below last week asking me to stop.

Thank you for your emails regarding the above.

Licensees who are issued with multiple warnings for parking in restricted areas are likely to have their licence reviewed by the Licensing Sub Committee, who will examine the evidence and take any disciplinary action they deem necessary. Options available to the Sub Committee range from taking no action through to the ultimate sanction of revoking a private hire / hackney carriage drivers licence.

Please be assured that Members have been briefed regarding the situation at Castle Street, and Officers are currently preparing reports for the consideration of the Sub Committee in respect of repeat offenders.

I trust the above answers your questions, but should you require anything further, please do not hesitate to contact me.

So, where will this go? It is clear that there needs to be a solution, I don’t know what this will be. There seems to be a lot of confusion, some anti cycling sentiment, some bad advice and very little political will to resolve this.

I’ve got a few ideas up my sleeve, we’ll see how they pan out.