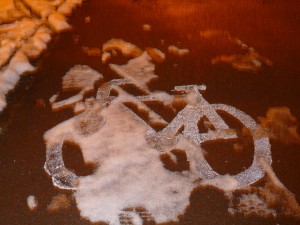 #Cambridge – cycle paths left unusable – ungritted in spite of the snow & ice.What’s it like where you are?… fb.me/1qA5toQaQ

Hey @mayoroflondon, how bout you grit this city’s ice-encased cycle paths like they do in The Netherlands:bicycledutch.wordpress.com/2013/01/17/das…

Decided at last minute not to cycle to work due to the snow/ice. Got to desk at roughly usual time which I wasn’t expecting…

Utrecht; streets (red) and (streets with) separated cycle tracks (green) which are cleared of snow&ice. Via @fietsriatwitter.com/FietsRia/statu…

The Antwerp cycle tracks are also clear of snow and ice. Looks just like a Dutch one, only this one is bi-directional. twitter.com/BicycleDutch/s…

@leedscyclists @leedscc @tomriordan The cycle lane behind the bus stop on Roundhay Road is under 4″ of snow/ice, 4 days after it last snowed

@mayoroflondon why is Bow roundabout cycle lane still got snow and ice on it ? heading towards stratford from bow stratford side. sort it!

It would be nice if the few cycle paths we have were cleared of snow/ice like the roads have been. #getbritaincycling

#Cycle 2work – don’t understand why all the out of town cycle paths haven’t been gritted! Most of the snow left is compact ice segments!

@brightonhovecc any hope of getting the snow/ice cleared from the cycle lanes in moulsecomb/campus? Forcing cyclists to go near/into traffic

Bit tricky cycling in the snow this morning cycle paths were like an ice rink. Take care people

@asecretcyclist Agreed, I’ve not cycled in this morning, cant be bothere with the Dual Carriageway, adjacent cycle path covered in snow/ice.

Common theme throughout the country is that whilst roads are gritted, cycle paths are not. Councils everywhere showing their true colours.

@burycouncil please grit the cycle paths.the one on pilsworth is unridable,i have to get to work.

#Cycle 2work – considering taking some grit salt with me on the commute and melting the compact ice sections! Grit spreader bike!

Cambridge and York grit cycle paths, why not Oxford? 2/2 Anyone know? @paradiseoxford ?

I’d be #cycling home but for the icy #cycle paths. Please grit ’em #York and #getbritaincycling!

@georgemonbiot On the +ve: this year, Edinburgh Council been getting lot of praise for its gritting of cycle paths. bit.ly/10RkFcV

@pauline_goodlad They haven’t even bothered to grit the pavement/cycle paths on major routes, so it’ll be a while yet @wrexhamcbc @wrexham

@chestercycling it was done this afternoon so perhaps they listened to the moaning!

@perfect_iwish Hi We grit over 50km of pavements/cycle paths You can see the roads pavements & cycle paths we grit at buzz.mw/-CU0_y

Cambridge, your cycle paths are great, but when you don’t grit them and the bikes take to the roads instead, the system falls to shit.

@georgefergusonx if all the cycling and walking commuters drove Bristol would be gridlocked.Please grit cycle paths and footpaths too.

@saffers_65000 No-one lives on the cycle path from Trumpington to Cambridge.Local gvt should grit paths like these. twitter.com/Cantala59/stat…

Can the lovely people at @wodcnews please grit the mud lane cycle path in Cogges? Thanks 🙂 twitter.com/daddyofbob/sta…

@lutoncouncil Would you mind doing the cycle paths near the airport? I’ve nearly come off my bike there and gone under speeding cars!

@j_s_house Hi, unfortunately we don’t currently grit cycle paths. We have had other complaints about this so will bear in mind in future.

@cardiffcouncil you are way behind other councils who grit cycle routes please update your policymanchester.gov.uk/directory/63/g…

@sinopticstudios RT @bendy14: @bournemouthbc Please could you grit the pavements and cycle lanes too? #treacherous

@camdencyclists could you ask Camden to grit their segregated cycle lanes? People obviously want to use themtwitter.com/jkblacker/stat…

Stupid driver who beeped and shouted at me on North Rd… @cardiffcouncil don’t grit cycle paths, so I had no choice than to use YOUR road!

“Coventry does not grit any of the dedicated cycle paths nor does it grit shared footway/cycleways either” #cyclesafe bit.ly/WxAazK

Gunna be so late for work. Seriously, why havent the council put grit on the cycle track? Im going to die.

@aseasyasriding ride in was fine, not sure I’m going to cycle home though as was already v slippy & of course no grit on most cycle lanes!

@beckix1991 Was the cycle lane covered in snow and ice? Round this way none were gritted. Many unfit for use even in summer.